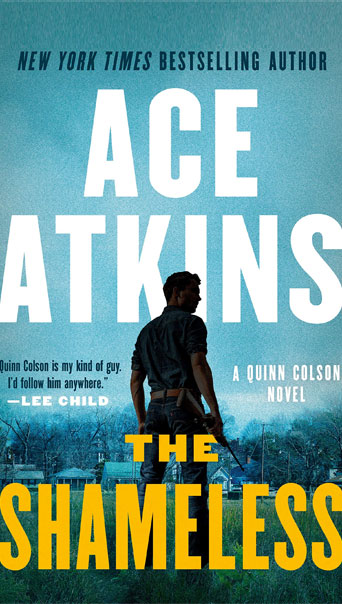 Kendal Weaver of the Associated Press examines THE SHAMELESS in this review:

On the media side, “Thin Air,” a crime-solving podcast out of New York City, latches onto an old death case with links to Colson in his teenage years. He becomes a suspect in the eyes of the multi-episode podcast. Was a boy’s murder covered up?

“This past year I’ve been called a radical and a racist,” Vardaman says in a stump speech at the Neshoba County Fair. “But let me tell you something, friends, don’t you listen to what the fake news tells you.”

Atkins peppers the narrative with allusions to President Donald Trump, but he also sticks to Colson saga basics: The sheriff is battling backwoods crime — prostitution, drugs, corruption — that he hoped to clean up when he retired as an Army Ranger, returned home to Jericho and won election.

“The Shameless,” like Atkins’ earlier Colson books, ties the sheriff’s family history and personal life to the broader Tibbehah County intrigues and investigations. This brings several story lines into play as the podcast team raises questions about the shooting death of a high-school teenager 20 years earlier deep in a forest.

There is a sudden plot twist that some may view as a flaw in the narrative structure. But Atkins tends to smooth this out as further events unfold, and the surprise element is a feature of the novel.

Country music, blues and a variety of popular songs are invoked in many scenes; one of the songs is the Garth Brooks’ cover of “Shameless.” But the book’s title, for the most part, refers to those who, without apology, twist truth or commit crimes to serve themselves. That’s a tough foe, even for Quinn Colson.

“Someone to Watch Over Me” Online Tour Dates Announced!