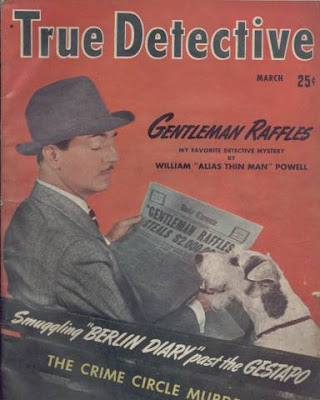 MGM director W.S. (“Woody”) Van Dyke was a big fan of detective novels – he’d even written a few himself. When he learned that the studio had the rights to Dashiell Hammett’s novel, The Thin Man, Van Dyke thought the story of private eye Nick Charles and his wife Nora would make a terrific film. The couple is rich, witty, sophisticated, and very much in love. Nick has retired from sleuthing, but is drawn back to solve the disappearance of a former client, the “Thin Man” of the title.

Woody Van Dyke knew exactly who should play Nick and Nora. He had just directed Manhattan Melodrama (1934), starring Clark Gable, William Powell, and Myrna Loy, and had been struck by the chemistry between Powell and Loy. The two had developed a bantering friendship, and their between-the-scenes repartee was charming and lighthearted. That was exactly what The Thin Man (1934) needed. MGM executives didn’t agree. Both actors came with a lot of baggage, and studio bosses couldn’t see them as the glamorous detective duo.

William Powell had been in films for over 20 years, playing villains in silent films. In talkies, Powell moved to the other side of the law, playing private eye Philo Vance in a series of B-movies at Paramount and Warner Brothers. Powell’s agent, Myron Selznick, had been trying to get his brother David to sign Powell to an MGM contract, but the studio considered Powell washed-up. At 29, Myrna Loy was already the veteran of over 80 films. An athletic Montana gal, Loy had been improbably typecast as Oriental vamps and seductive “other women.” Like Powell, she’d worked all over town. MGM production chief Irving Thalberg thought Loy had potential and signed her to a contract, but after two years, her best roles had come on loan outs to other studios.

In the end Van Dyke had his way, and proved that he knew what he was doing. He instructed the husband-and-wife screenwriting team of Albert Hackett and Frances Goodrich to play up Nick and Nora’s affectionate banter in their script for The Thin Man, and to make the mystery secondary. That was easy enough for the Hacketts, whose own marriage and personal style was very Nick-and-Nora. And for Powell and Loy, it was a delight to play, from their first appearance in the film, with Nick instructing a bartender on the finer points of shaking a martini, and Nora making a grand comic entrance by falling on her face. The Thin Man was shot on a “B”-movie budget, very quickly — accounts vary between 12 and 18 days. Not for nothing was Van Dyke dubbed “One-Take Woody.”

Audiences adored The Thin Man, and so did critics. It was a huge hit, and turned around the careers of Powell and Loy. The film earned Academy Award nominations for Best Picture, Best Actor, Best Director, and Best Adapted Screenplay. Five sequels followed, with Van Dyke directing three of them, After the Thin Man (1936), Another Thin Man (1939), and Shadow of the Thin Man (1941). The other two were produced after Van Dyke’s death in 1943 and included The Thin Man Goes Home (1944), directed by Richard Thorpe, and Song of the Thin Man (1947), helmed by Edward Buzzell.

The Thin Man and its sequels also created another star – “Asta,” the Charles’s wire-haired terrier. It was a breed that hadn’t been particularly popular in this country, but the “Thin Man” films changed all that, creating a national craze for wire-haired terriers. Asta was played by several dogs, but Myrna Loy later recalled that she and Powell were never allowed to make friends with any of them, because the dogs’ trainer didn’t want to break their concentration. In fact, Loy claimed that the first Asta, whose real name was “Skippy,” bit her, “so our relationship was hardly idyllic.”