Tampa Bay Times: THE SINNERS a bloody, and funny, trip to the altar 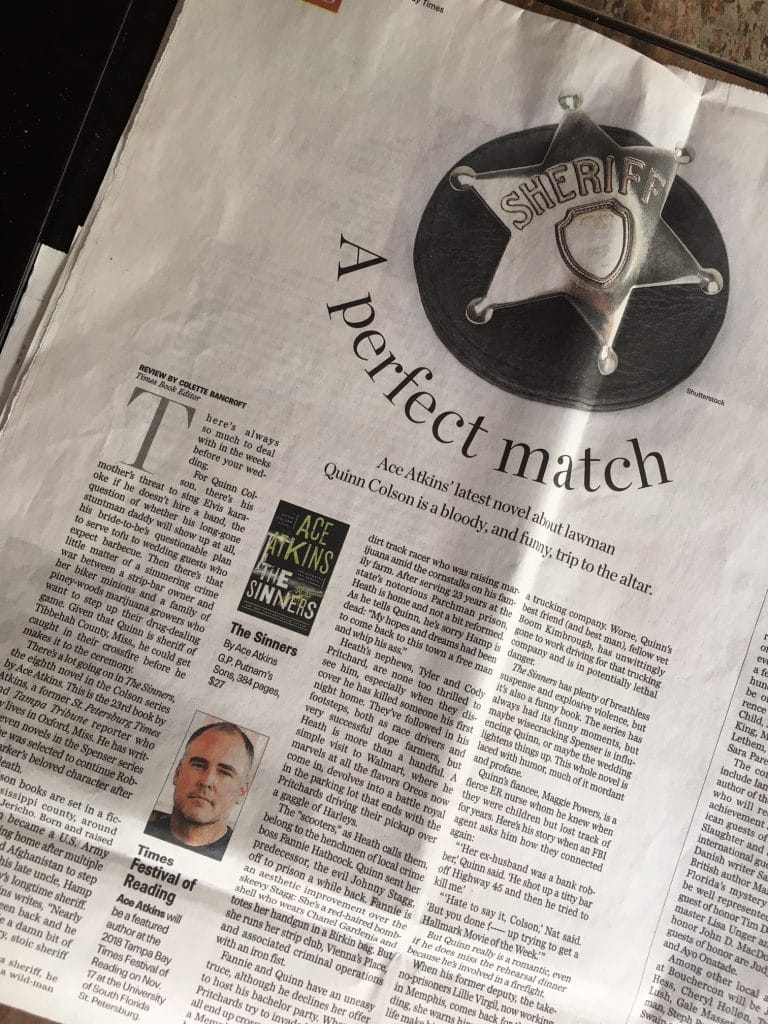 There’s always so much to deal with in the weeks before your wedding.

For Quinn Colson, there’s his mother’s threat to sing Elvis karaoke if he doesn’t hire a band, the question of whether his long-gone stuntman daddy will show up at all, his bride-to-be’s questionable plan to serve tofu to wedding guests who expect barbecue. Then there’s that little matter of a simmering crime war between a strip-bar owner and her biker minions and a family of piney-woods marijuana growers who want to step up their drug-dealing game. Given that Quinn is sheriff of Tibbehah County, Miss., he could get caught in their crossfire before he makes it to the ceremony.

There’s a lot going on in The Sinners, the eighth novel in the Colson series by Ace Atkins. This is the 23rd book by Atkins, a former St. Petersburg Times and Tampa Tribune reporter who now lives in Oxford, Miss. He has written seven novels in the Spenser series since he was selected to continue Robert B. Parker’s beloved character after Parker’s death.

The Colson books are set in a fictional Mississippi county, around the town of Jericho. Born and raised there, Quinn became a U.S. Army Ranger, returning home after multiple tours of Iraq and Afghanistan to step into the boots of his late uncle, Hamp Beckett, the county’s longtime sheriff. In The Sinners, Atkins writes, “Nearly ten years Quinn’d been back and he wasn’t sure he’d made a damn bit of difference.” But the wry, stoic sheriff soldiers on.

Back when Hamp was sheriff, he busted Heath Pritchard, a wild-man dirt track racer who was raising marijuana amid the cornstalks on his family farm. After serving 23 years at the state’s notorious Parchman prison, Heath is home and not a bit reformed. As he tells Quinn, he’s sorry Hamp is dead: “My hopes and dreams had been to come back to this town a free man and whip his ass.”

Heath’s nephews, Tyler and Cody Pritchard, are none too thrilled to see him, especially when they discover he has killed someone his first night home. They’ve followed in his footsteps, both as race drivers and very successful dope farmers, but Heath is more than a handful. A simple visit to Walmart, where he marvels at all the flavors Oreos now come in, devolves into a battle royal in the parking lot that ends with the Pritchards driving their pickup over a gaggle of Harleys.

The “scooters,” as Heath calls them, belong to the henchmen of local crime boss Fannie Hathcock. Quinn sent her predecessor, the evil Johnny Stagg, off to prison a while back. Fannie is an aesthetic improvement over the skeevy Stagg: She’s a red-haired bombshell who wears Chanel Gardenia and totes her handgun in a Birkin bag. But she runs her strip club, Vienna’s Place, and associated criminal operations with an iron fist.

Fannie and Quinn have an uneasy truce, although he declines her offer to host his bachelor party. When the Pritchards try to invade her turf, they all end up crosswise of the Dixie Mafia, a Memphis undertaker-turned-drug-boss named Marquis Sledge and a couple of extremely bad guys who run a trucking company. Worse, Quinn’s best friend (and best man), fellow vet Boom Kimbrough, has unwittingly gone to work driving for that trucking company and is in potentially lethal danger.

The Sinners has plenty of breathless suspense and explosive violence, but it’s also a funny book. The series has always had its funny moments, but maybe wisecracking Spenser is influencing Quinn, or maybe the wedding lightens things up. This whole novel is laced with humor, much of it mordant and profane.

Quinn’s fiancee, Maggie Powers, is a fierce ER nurse whom he knew when they were children but lost track of for years. Here’s his story when an FBI agent asks him how they connected again:

“‘Her ex-husband was a bank robber,’ Quinn said. ‘He shot up a titty bar off Highway 45 and then he tried to kill me.’

But Quinn really is a romantic, even if he does miss the rehearsal dinner because he’s involved in a firefight.

When his former deputy, the take-no-prisoners Lillie Virgil, now working in Memphis, comes back for the wedding, she warns him not to let married life make him soft.

Ace Atkins will be a featured author at the 2018 Tampa Bay Times Festival of Reading on Nov. 17 at the University of South Florida St. Petersburg.