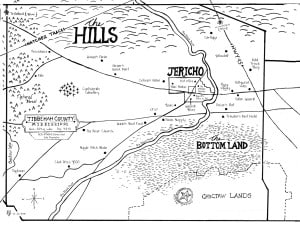 Located in the rolling hills of northeast Mississippi, Tibbehah County is 504 square miles, bordered by the Choctaw Indian Reservation to the south, U.S. Highway 45 to the east, and the Natchez Trace and a National Forest to the west. The Big Black River runs south through the center of the county. Memphis is 100 miles north of the county. Oxford, home of the University of Mississippi, is 40 miles northwest.

What is now Tibbehah County was once part of a thriving Choctaw Nation, one of the most prosperous of all the first nation tribes. Once Mississippi Territory became part of the new United States, the Choctaws began ceding more of their land in treaties with the federal government. The earliest settlers of European descent, mostly yeoman farmers with little to no slaves, came shortly after Mississippi statehood in 1817. By 1830, a new treaty meant all Choctaws were forced off the land and removed to Oklahoma — though some hid and refused to be moved — and white settlers and their slaves poured into the area. The geography of Tibbehah meant that most farms remained small; there were few large cotton plantations. For that reason, the people of Tibbehah and other east Mississippi counties were divided over secession, calling the Civil War a “rich man’s war and a poor man’s fight.” Though most men fought for the Confederacy, many deserted when their farms fell into disrepair and their families starved. Some Tibbehah residents joined Newt Knight from Jones County and his Knight Company, which actively fought against the Confederacy.

In April 2013, a F4 tornado killed 17 residents and destroyed hundreds of businesses and homes, many around the town square. The town is still rebuilding from the storm.

As of the 2010 U.S. census, there were 10,284 people residing in the county. The racial makeup of the county is 65 percent white, 1.2 percent Native American, 31.33 percent African-American, and 2.47 percent Hispanic or Latino descent.

Tibbehah County is governed by a Board of Supervisors. They are: