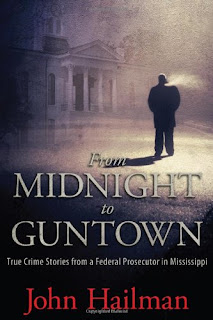 For any readers who might suspect some of my stories in the Quinn Colson novels can’t be true, please pick up a copy of John Hailman’s latest. John is a a former Federal prosecutor — as a recent story in the Northeast Mississippi Daily Journal discusses. But what the story doesn’t mention is that John is one of this country’s foremost wine experts! For more than twenty years, John was the wine critic for the Washington Post, all the while sending bad buys to prison. I can’t recommend From Midnight to Guntown enough for those who really want to dig into the world of the deep South, the Dixie Mafia, and good ole boys politics and crime. John is one of the good guys and a terrific storyteller. Check out the full story below.
— Ace
Daily Journal
OXFORD – John Hailman doesn’t fit the stereotype of a prosecutor. He’s friendly, outgoing – even jovial.
The enjoyment he took in his decades as an assistant U.S. attorney, though, reflects a man who relished both the interesting humans and their dramas that came his way and the chance sometimes to help deliver justice.
Hailman’s newest book, “From Midnight to Guntown: A Prosecutor in the Land of Faulkner and Elvis,” was the nexus for his visit Tuesday at the Overby Center for Southern Journalism and Politics.
“How is it that you have fun with such a serious job?” asked Charles Overby, the center’s chairman.
“My daughter at age 15 wasn’t too happy with me,” Hailman recalled with a chuckle. “She once introduced me, ‘This is my father. He sends people to prison for a living.’
“I like all these strange characters,” he added. “I liked helping the victims, and I don’t mind saying I liked punishing the guilty. I never got too tied up in winning and losing.”
Hailman’s choice of career was not certain early on. After being branded as “too countrified,” he spent two years in Paris. He became an aide to U.S. Sen. John Stennis and, when the senator was shot by a robber in Washington, D.C., got an early taste of criminal justice as Stennis’ liaison with the police and FBI.
During his prosecutorial career, he has studied and taught law all over the world, including the University of Mississippi, where he is now an Overby Fellow.
Several stories Hailman highlighted Tuesday dealt with colorful characters. Many bank robbers often appeared to have prepared for their tasks with nothing more than downing a few beers. At the opposite extreme was Patrick Michael Mitchell, who robbed some 300 banks before being caught in Southaven. During one robbery he wore a Richard Nixon mask and declared, “I am not a crook,” Hailman recalled.
Political corruption is usually prosecuted as federal crime because it is difficult to get an impartial jury against a local official, Hailman said.
“Politicians usually have some charm,” he said, but the 37-county federal jury pool dilutes their influence.
Asked about the recent U.S. Supreme Court decision against certain aspects of the Voting Rights Act, Hailman spoke as a man practiced in weighing evidence.
“It’s tricky; we can’t be discriminated against forever,” he said. “I’m in favor of clean elections, obviously, but the idea of having ID at the polls isn’t going to cure anything.”
Regarding politics, the author of several books on law, wine and literature hews a centrist line.
“I’m a raging moderate,” he said. “I like compromising.”
errol.castens@journalinc.com