In case you missed it, Ace wrote a letter to his hero, Burt Reynolds, two days after his death. Published in Garden & Gun magazine, it’s a beautiful tribute to an iconic Southerner. 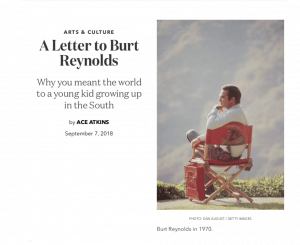 Damn it to hell. I waited too late to write this letter. We’ve corresponded a few times through your assistant Suzanne, and I’d been meaning to send along my latest novel—dedicated to you. A lot of people this summer have asked me about that dedication. You mean, that Burt Reynolds? I always answer: Is there another?

Do you know him? He reads my books! Burt is a big reader. Have you met him? No. But I will someday.

I hope you knew how much your movies, your cool style, have meant to me both as a writer and a Southerner. After a few bourbons, I’m quick to point out that Smokey and the Bandit wasn’t just a car chase film. It was about us racing into the new South, knocking corrupt cops, racist bikers, and the slow mean old ways the hell out of the way. Each one of those films, those core action movies—Deliverance, White Lightning, Smokey and the Bandit, Sharky’s Machine—had so much to say about the emerging Deep South. The clash of good vs. evil, man vs. nature, the Bandit vs. Buford T. Justice.

In the latest thriller featuring the legendary Boston PI, Spenser heads to the City of Angels to meet old friends and new enemies in a baffling missing person case that might shake Tinseltown to its core.