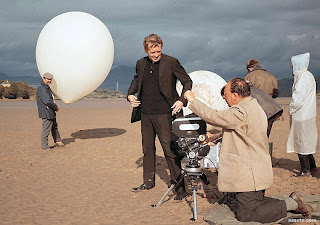 Starting next week, AMC will begin to air a mini series based on the classic British show, The Prisoner. Jim Cavezial is taking over the role of Number 6 from the show’s star and creator, Patrick McGoohan. And although it will be odd to see an American playing the part, I believe Cavezial is a diverse and talented actor, not to mention that Ian McKellan will be playing Number 2 — just brilliant casting right there.

For those of you who don’t know the show, the premise is pretty straighforward. The man who becomes Number Six was a top British spy who was kidnapped shortly after he resigned. When he wakes up from being drugged, he finds himself in a quint seaside village — The Village — where he is expected to take part in all the cultrual offerings and by no means offer resistance. Critics continue to cite the show as one of the most brilliant, thought-provoking concepts ever on television.

When it aired in 1968, I think conformity and rebellion was on a lot of people’s minds. But I believe the concept is timeless, as the world grows more homogenized and streamlined and where free-thinkers are often the odd man out.

There is little doubt The Prisoner provided a lot of inspiration for J.J. Abrams when he created Lost. McGoohan seeded his show with all types of oddball clues and details: the bicycle, the big balloon, and the mystery of who was Number1.

The show was deep study of society, religion, art and politics and most of all questioning authority. To the point: I loved this show.

The problem happened during the end of its first, and only, season when the network informed McGoohan that the ratings were low and The Prisoner would not be returing. The framework, the brilliant build up, and all those clues and mysteries remained unanswered.

Instead of neatly sewing up his brilliantly conceived show, McGoohan offered a big F.O. to the network heads. The final episode involved nuclear bombs, men in gorilla suits and a climax against the soundtrack of “All You Need is Love.”

Number Six battled authority till the end. But it left many devout viewers wishing that there had been much more and those questions answered.

Perhaps now with a series airing on cable — where we see many shows breaking rules and confomity — we’ll finally get it. Check out The Prisoner’s new site with a massive amount of extras (a blog, a graphic novel and previews) or check out full episodes of the original show.