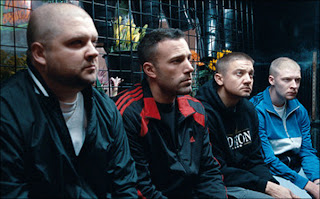 I finally got a chance to see Ben Affleck’s latest THE TOWN based on a novel by Chuck Hogan. I had read a couple reviews but didn’t expect much. I enjoyed GONE BABY GONE but thought the tone and pacing was way too slow and self conscious.

There was none of that sluggishness found in THE TOWN. The movie is a straight-up, fast-paced crime thriller shot with a confident hand and a sly wit. I really appreciate Affleck’s style, shooting the movie in Charlestown neighborhood of Boston and on the streets of the North End. There is a terrific climax set in Fenway Park with a death scene worthy of a Warner Bros. gangster flick. (The last observation courtesy of my pal, Jack Pendarvis.)

The story is classic noir: a bank teller is held up by a team of armed gun men. One of the robbers pays her a visit — unmasked, of course — to find out what she knows. He ends up falling for her while the bad guys try to draw him back into one big final score.

This movie felt completely contemporary but had that wonderful classic framework. Some of the best scenes featured the amazing Rebecca Hall.

A lesser actress might have played the role of the victim unraveling as a set piece. Instead Hall is completely authentic and holds the film together. She is also so incredibly good looking that you can understand how the tough guy played by Affleck is torn.

Although Blake Lively is tremendous as his drug-addicted ex — terrific in the role but definitely the healthiest looking drug addict I’ve ever seen.

Another favorite is Pete Postlethwaite who just breathes with violence and corruption as crime boss, Fergie Colm. Wait until you see the way he dethorns a rose.

After the film was over, I started thinking about other great Boston crime flicks. I realized there definitely is a subgenre here as I’ve written about in the past — Southern crime and great British crime movies.

I’ll list a few of note below. Readers let me know any other that you recommend or should be listed.

* The Friends of Eddie Coyle: Based on the novel by George V. Higgins and starring Robert Mitchum. Elmore Leonard called the novel one of his formative reads.

* The Departed: My favorite of the bunch. Scorsese’s retelling of Infernal Affairs. Music by the Dropkick Murphy’s turns up the heat even more.

* Southie: A small film featuring Donnie Wahlberg as a Southie (someone who grows up in South Boston) who comes home and gets involved with old pals in with the Irish mob. A terrific little film.

* The Brink’s Job: A great film that has yet to make it to DVD. You’d be lucky to score a VHS copy. The story centers on the true tale of one of the biggest armed car jobs in history. Starring Peter Falk and directed by William Friedkin.